I've been trying to stream 4k content from the QNAP to the TV.

For the record, Kodi is my system of choice and plays my 1080p content flawlessly.
I have disappointingly found out the TV does not have gigabit network hardware built in, but I've also tried wireless which I was suggested would get me better speeds/playback.

However on high bitrate 4k files (80Mbps) no matter what I do, I'm getting varying levels of buffering and stuttering playback (depending on what media player I'm using).
4k playback via the internet (youtube etc) plays fine, so why can't I stream 4k from my NAS properly?

Any clues or things to try very much appreciated.
Top

I can play 4k HDR fine, within the confines of 100Mbit (my TV suffers the same non gigabit fate as yours)

what is the data wired data transfer speed to/from your NAS via 1GbE?
Top

Its a Sony android TV.
Is it worth trying a USB-Network (1Gb) adaptor in one of the USB slots on the TV or will that make no difference?

How would I test the 'data wired data transfer speed via the network'?
Top

test it with a disk benchmark tool ... on a computer not the tv
Top

OK, so from my iMac on the same network, the disk speed tests from the folder on the QNAP are - 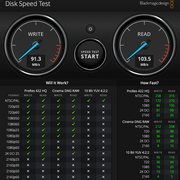 For the non-tech like me, I'm disappointed to see that it appears there are a lot of crosses against the 2k writes and reads...
I'm guessing this means that the QNAP cannot serve 4k content quickly enough from the hard disk?

If this is right, I'm gutted... surely from a fairly new NAS this is disappointing. Is there anything I can do to fix this?
Top

that is a benchmark for (raw, low compressed) video editing ...so the bitrate requirements are MUCH higher

that NAS is basically hitting 1GbE, that should be by far enough to stream any kind of consumer 4k material
Top

Hi -
the data rates that you are seeing is the correct network speeds for a 1G connection - from ANY system - including Mac to Mac. A 1G connection is 125 MB/sec theoretical, and even with the best "tweeked" systems on Macs or PC's, you can't get more than 110 MB/sec in real life over a 1G network from computer to computer. 4K h.264 or h.265 media has a much lower bandwidth than this. If you have 4K media on your QNAP that is h.264, simply play it on your Mac over your 1G network. You will see it plays without issue. So why isn't it working to your TV. I have no idea. I never tried this. I work with pro video editing systems, and only read this post when I saw the Blackmagic Disk Speed Test - I thought this was a video question. While this does not answer your question, 4K raw media - depending on the compression codec - can take a LOT more than 125 MB/sec, so we use larger QNAP's that have at least 8 drives (the TS-251+ has 2 drives) and a 10G network connection between the computer (Mac or PC) and the QNAP.

Sorry I don't have a direct answer to your question.

OK, so despite having the issue on multiple video players, it seems the problem can be resolved in Kodi.

I have a Marantz surround system hdmi'd to the TV which handles all my audio.
Within Kodi I have disabled the option 'Enabled Dolby Digital transcoding' and the 4k content (mostly) now streams ok. I assume the AV system was slowing everything down while decoding audio...?

Its still not perfect and on a few test 4k files I downloaded from the internet, I still get buffering.
Top

seems strange ...when audio/video hits your avr, all decoding is done so there should be not stutter introduced here

is your tv up to the task ? (check cpu usage during kodi playback and if hardware decoding is utilized)
Top

After 3 days of going crazy with buffering problems on a previously fine running system where I recently started to watch a lot of 4K HDR content from my QNAP NAS via LAN, I think, I finally found the problem.

I tested the network performance, expected one of the routers to be the culprit, but the network is fine. Tried restarting the NAS, no significant improvement. The problem did not present consistently...

My scheduled RAID scrubbing priority was set to HIGH. It takes over a day to complete on my RAID 5. As soon as I switched it to low priority all buffering stopped.