by Moogle Stiltzkin
i notice mine got stuck. same even when trying to redo it.

funny cauz initially it was 100% early on. only recently did i see this change. 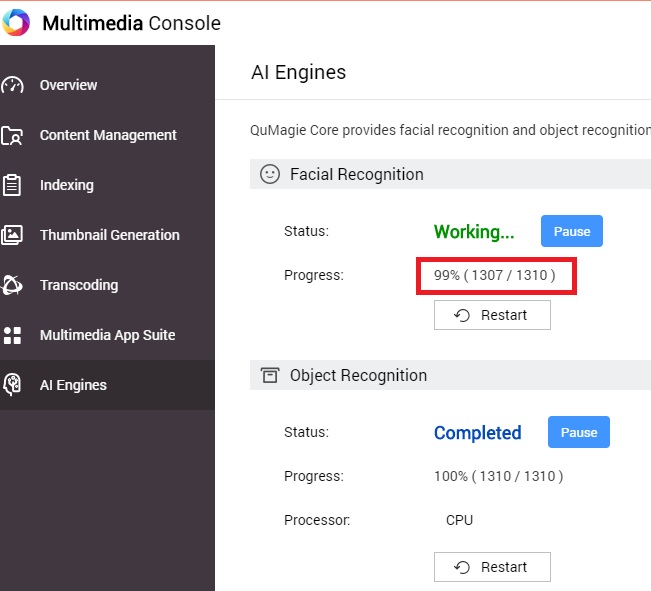 so yeah it feels a bit wonky and incomplete. needs a bit more to do to get it into stable working condition. a few things


1. improve the recognition tagging. seems it doesn't pick up on a lot of things (in my example it was people category for animated characters that in previous facial tagging were recognized but in qumagie FAR FAR fewer were detected. but i do note that a lot of these pics were listed under objects as cartoons instead. maybe that is intended? but if that is the case, why then were the people still showing animated characters still? need further clarification by qnap their stance on tagging for artwork characters as in not real people pictures. if they are meant to be under cartoons then fine, put them all in cartoons but make it consistent)
2. i'm hating the cartoon tag. can you plz correctly detect as anime... or at least allow the user to reassign from cartoon to anime. then for anything truly a cartoon, the user can then flag that and move it into a separate group called "cartoon". there is not much flexibility here.
3. ai engine got stuck, feels like it's buggy.
4. need to improve the image viewing in qumagie for single picture view mode. lack of full size original quality image button. yes you have downloading button in the checklist main gallery, but in single view, there is no download button for the original pic.

anything else i missed?

by iam@nas
It's crazy. Even though I have only 600 photos in QuMagie after a re-installation and folder adjustment the Multimedia Console / AI wants to scan 20k images. It's really strange and I wonder whether some jobs fail with out-of-memory errors similar to Elasticsearch/QSirch.
Nevertheless QuMagie detects now faces on the images it failed last time. But there may be a magic barrier in QuMagie at about 1100-1600 images.

i'm upgrading ram sometime soon, so i'll run a test again when i do.

by iam@nas
16 GB should be more than enough, currently 9 GB (+ 7 GB buffers/caching) are used on my nas. AI needs CPU/GPU resources and not RAM.

So I added a path with 623 photos to QuMagie/Settings/Content Management/Content Sources/Edit and in Multimedia Console/AI Engines/Facial Recognition the progress reached 2% (623/21255). Object Recognition reached 100% ( 21255 / 21255 ). As https://nas/apps/qumagie/album/things is empty no-thing was detected.
Anyhow 30 faces were detected while similar faces were detected as the same person. I wonder how a person can be on one photo multiple times (unless mirrors are used or there's a portrait in the background).

After adding some more photos to QuMagie also the % progress in Multimedia Console has been increasing. And the CPU usage is again between 90 and 100 %.

if i recall correctly, they remove some app features from the arm models becauz it barely had enuff compute to adequately use some of the features. maybe it was vm?

you should probably upgrade to a celeron x86 cpu or better.

NAS Drive CPUs Explained - What Difference Does it Make?
https://www.youtube.com/watch?v=HXYCGtVjLgk

x86 CPU such as Intel and AMD on NAS Servers

x86 Processors on the other hand can massively out perform ARM both on single tasks and multiple tasks. They are also more suitable for rendering, transcoding, graphic creation in VMs and more. Alongside this it is also worth highlighting that an x86 CPU can do anything an ARM can do.

It is just a fact that an x86 will perform all tasks quicker. This of course comes at a price, both financially and consumption. The average x86 Intel i7 CPU in a 4-Bay NAS produces around 35-45W whilst in operation, whereas an average ARM has a maximum use of around 20-25W.

Likewise in hibernation or standby, x86 use 10-15W, where as an ARM will use as little as 4-6W. Likewise a NAS with an x86 CPU will be between 15 and 30% more expensive in terms of cost (like for like), but this is largely due to the device being able to do more and the cost of the hardware itself.

also qumagie would benefit from a graphics card i believe. i got a 1050gtx installed on my ts-877

Just an update, this is the pre-requisite for Qumagie

by zebulon2
On my TS-453A with 4.4.1, I notice that QuMagie looks at the thumbnail files for recognition. Why would it want to do that? Why not restricting itself to full-size pictures? That is double (maybe triple, with the 4K thumbnails) the work!

by zebulon2
I have the error message since a few days. Are you sure you reinstalled QuMagie Core? QuMagie and QuMagie Core are separate packages. Core does not appear in my case in the NAS App Center, but the pkg can be downloaded from the App Center web page: https://www.qnap.com/en/app_center/?qts ... kw=qumagie
I am pretty sure that uninstalling QuMagie does not uninstall QuMagie Core. I will try to reinstall later too and report back.

by zebulon2
So I have reinstalled QuMagie Core using the pkg file and still get the error message indeed. That said it does not seem to prevent it to work (apart from a few bugs).

by Moogle Stiltzkin
did u try the new beta 2 ? they did some fixes. mostly to do with multimedia console.

by zebulon2
I will wait for the new beta.

by zebulon2
Just tried the public beta 2 (the "good" one, 0978) and it seems that they have corrected this service start error issue. Still have a problem in QuMagie, but this will probably require a QuMagie (Core) update.
All times are UTC+08:00
Page 2 of 3
Powered by phpBB® Forum Software © phpBB Limited
https://www.phpbb.com/