Introduce yourself to us and other members here, or share your own product reviews, suggestions, and tips and tricks of using QNAP products.
Post Reply
27 posts

My oh my - what am I going to do with a switch like this. Where is the QSW-M1208. The unmanaged QSW-1208-8C is more practical than the QSW-M408.
Let's just say this is a console port on this switch. So to initially setup the switch with a static IP, I need a USB to Serial adapter, and run PuTTy to assign a static IP for the switch upon startup ? Ugh. This is 2020.

is that a POE?

The tool symbol probably suggest a console or dedicated management port of some sorts.

If it had PoE it would be a serious mistake by marketing to not mention it on the sign.

thx. guess we just have to wait for the reviews to explain that 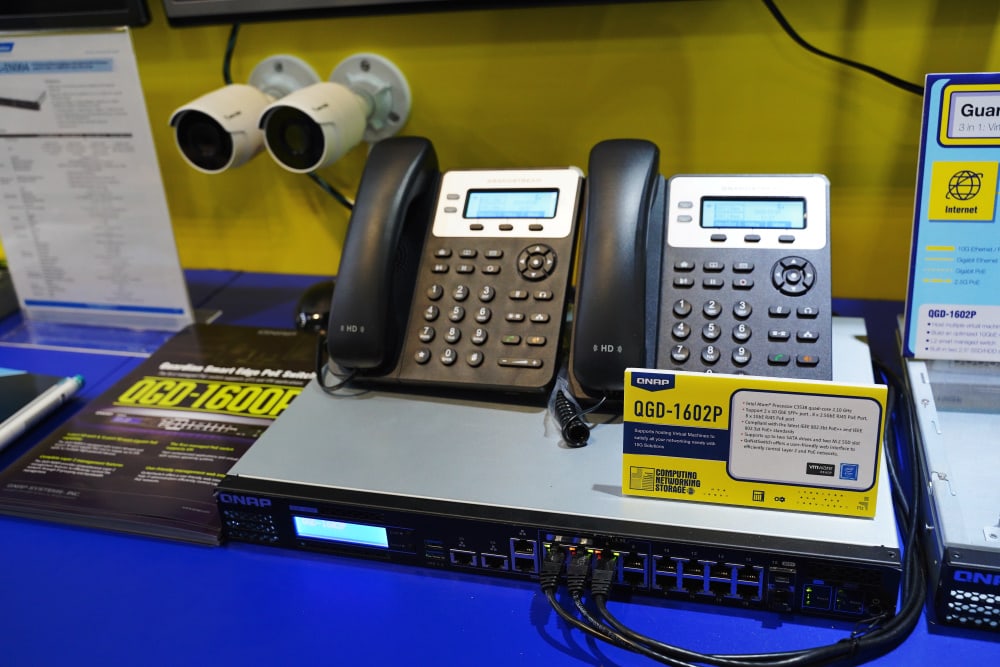 not really sure about this 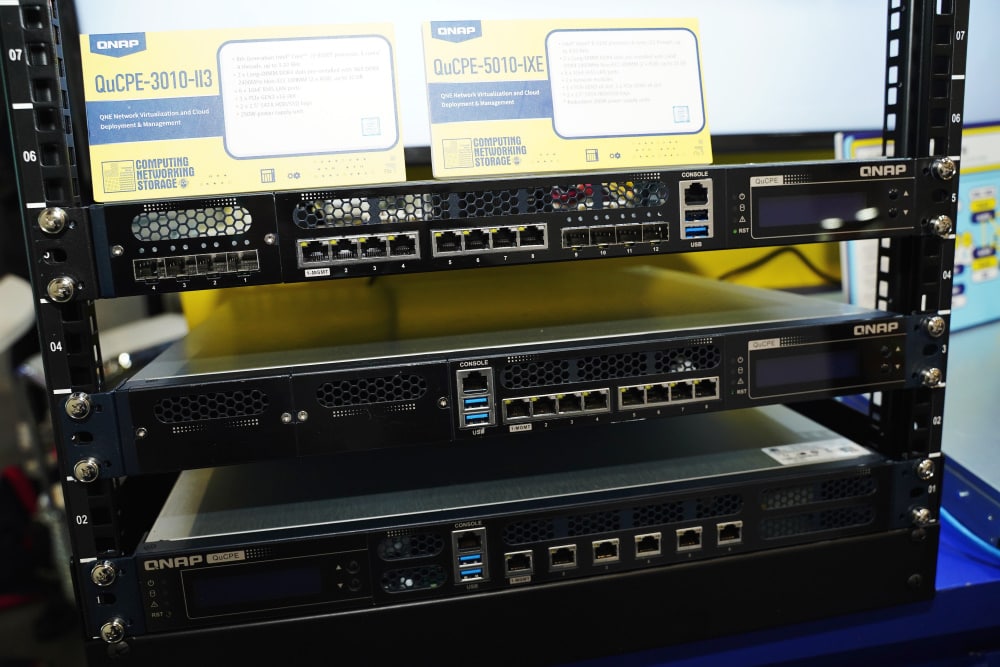 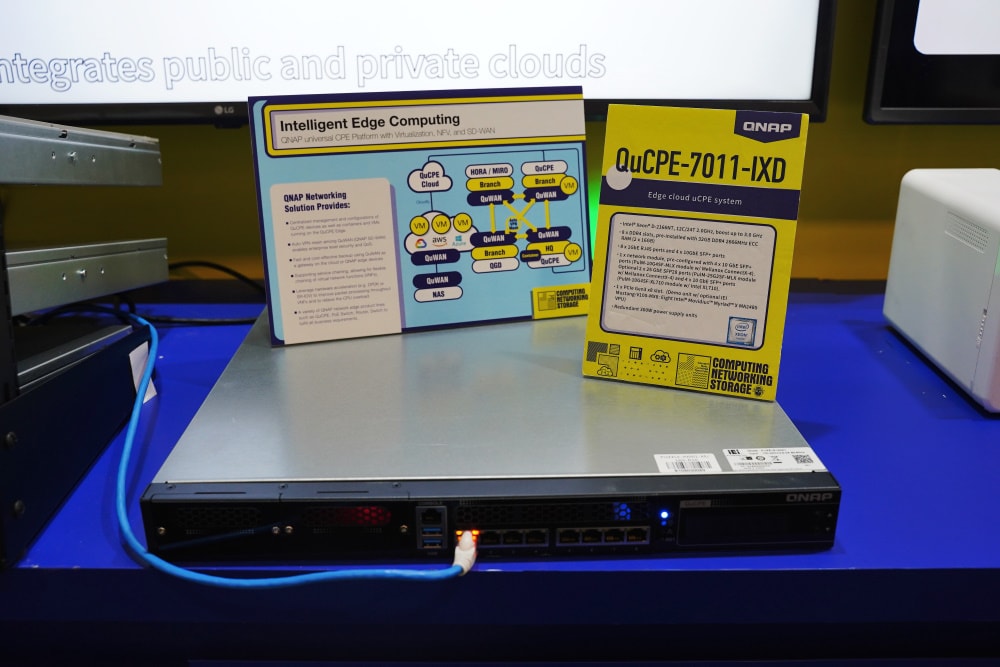 there is a beta on the forum 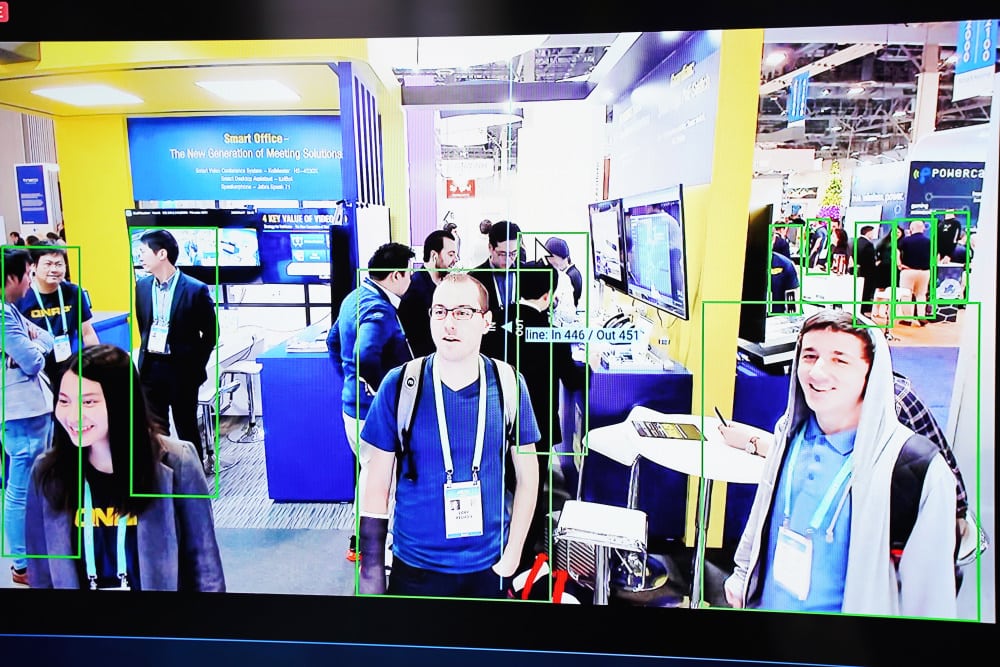 The main “problem” with the Annapurna CPUs is that their Linux support still has “room for improvement”. Compared with other CPUs, the power consumption is a bit high. There are no CPU Benchmarks like passmark available but some tests of NAS equipped with this CPU.

QTScloud is a cloud-based OS let you quickly have a cloud NAS at any time. Users can do failover management for business data between physical NAS and cloud NAS, allowing businesses to quickly restore data from cloud storage when disaster strikes on physical NAS.

more pics from ces 2020, you can find it on their facebook 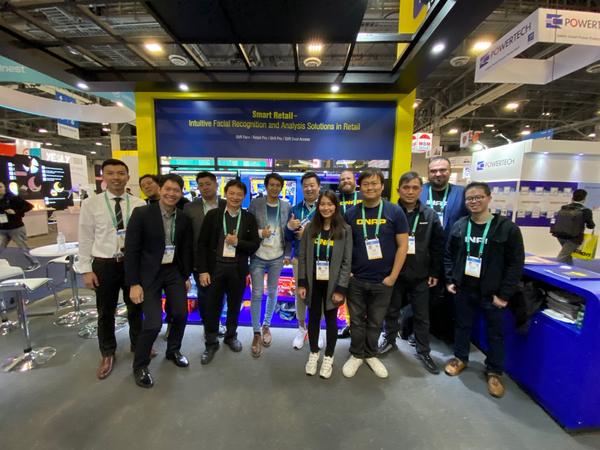 anandtech chimes in on qnap at ces 2020

The network-attached storage (NAS) vendors had a relatively quiet presence at CES 2020 compared to what we used to see in earlier years. We have a few announcements and show presence coverage from a couple of vendors to cover, but, a commentary on the current stage of the NAS market is first required to set the stage.

Where is the Network-Attached Storage Market Headed?
As an active follower of the network-attached storage (NAS) market and a media analyst covering CES for more than a decade, the change in the approach of the NAS vendors to the show over time has been interesting to observe. At a higher level, it also shows the direction in which the NAS market is headed. In the early 2010s, the cloud concept was still in its infancy and over-the-top (OTT) streaming was just taking off. However, the rise of smartphones and the associated user-generated content meant that consumers suddenly had a significant amount of data at home that needed access in a centralized manner. A number of vendors attempted to capitalize on this home consumer demand by releasing NAS units catering specifically to this market segment. Fast forward to 2020, and a number of things have changed on the home consumer front:


-Smartphones are backed up by virtually free and virtually unlimited cloud storage, and most consumers are not bothered by the downscaling of the photo and video resolutions
-Cloud-based services also enable easier sharing of content with contacts around the world - an aspect that has been a pain point when the content resides on a local NAS device.
-Cloud-based services such as OneDrive even provide ransomware protection - meaning that even PC / notebook backups for many consumers are moving to the cloud
-Physical media usage has dropped down considerably, and most consumers do not bother to back up their Blu-rays and DVDs. OTT services such as Netflix, Amazon Prime, Disney+, and Hulu are able to provide instant gratification with a good UI and steady stream of new content compared to media stored in a local server.

The factors mentioned above have led to the market for consumer-focused NAS devices experiencing little to no growth in the past couple of years. While the underlying data storage explosion thesis remains unchanged. However, the place where the data gets stored as well as the type of customers who want fast, reliable, and centralized storage with a focus on privacy have become skewed. From the perspective of NAS vendors, the primary growth area is in small businesses and enterprises. We will be seeing hardware and software features focusing on various segments of that market moving forward. For example, QNAP already has Thunderbolt 3-equipped NAS units for enterprises involved in media production.

The effects of the above trends has already been seen at CES over the last few years. QNAP used to have either a booth or a suite at one of the hotels.

QNAP did have a booth and a number of announcements, but the focus was mostly on business features.

Vendors such as QNAP, Synology, and Asustor have begun organizing their own annual user conferences to announce new products and software features. Additionally, other business conferences focused on virtualization, security etc. are turning out to be better events for these NAS vendors. Overall, CES is no longer an important show for the NAS market. Having said that, the rest of this piece captures some of the demonstrations and announcements made in the NAS space as part of CES 2020.


QNAP's TS-251D and TS-230
QNAP has been regularly releasing updates to their QTS and also announcing new hardware models throughout the year. As part of CES 2020, they announced the TS-251D (2-bay single-gigabit NAS featuring the Intel Celeron J4005, with a PCIe 2.0 x4 expansion slot for either additional M.2 SSDs or NBASE-T ports up to 10 Gb or USB 3.1 Gen 2 ports) and the TS-230 (2-bay single-gigabit NAS featuring a Realtek RTD1296 quad-core Cortex A53-based SoC and 2GB of DDR4 RAM) for home consumers.

QNAP also launched the VS-8348 VioStor NVR NAS with a Core i5-8400T and QVR Pro native app for SMB video surveillance recording needs. The company has also been focusing on AI solutions. As part of this, they are adding face recognition to their QVR Pro motion search functionality. The same technology is being demonstrated with the QVR Face to monitor staff attendance in office environments, and digital signage products. Another AI application is their KoiMeeter video conferencing solution that can provide audio transcription and real-time translation in meetings. The QuWAN QoS features helps optimize network bandwidth for unhindered meetings. The company has also been making a big push in the network infrastructure space with their Guardian switches. The QGD-1602P was the new product being demonstrated in this segment. An update to the existing QGD-1600P, it integrates 10G SFP+ ports and has a 370W total PoE budget. It can also run the QTS operating system. The QuCPE Edge Computing Server was also being displayed at CES 2020.

yeah i think you are right. i did some digging

STEP BY STEP CONSOLE PORT CONNECTION
-Plug your console cable to the router or switch’s console port.
-Plug your console cable’s other side to your computer’s serial port. ( You may need a USB converter if you don’t have a serial port )
-Open a connection software from your PC ( Like Putty , Secure CRT etc. )
-Select “serial” connection and right COM port. ( You can find your COM port by right clicking “my computer” -&gt; properties -&gt; device manager )
-Click connect
-Click “Enter” and that’s all. You are in the device anymore !

Let's not jump to conclusions before anybody know.

Even if it is a console port (which was one of my two guesses and there are even more alternatives), the switch could very well still by default use DHCP or have a fixed address to access a web based setup.
RAID have never ever been a replacement for backups. Without backups on a different system (preferably placed at another site), you will eventually lose data!

A non-RAID configuration (including RAID 0, which isn't really RAID) with a backup on a separate media protects your data far better than any RAID-volume without backup.

All data storage consists of both the primary storage and the backups. It's your money and your data, spend the storage budget wisely or pay with your data!

Is there any additional information on the QNAP TR-106C & TR-104C? Like availability? I was literally about to order a TR-004 but now that seems foolish with these coming out. Besides a single post and vid from NASCompares, I have not seen anyone else mention or feature them with any details outside of the spec image. I don’t even think these things were on display at CES and it’s odd QNAP didn’t officially include them in any CES press release or anything.
Top

there is other new stuff as well - but "no comments" and "no release dates". It's all very frustrating. I know that a good portion of QNAP's (and Synology's) market is consumer - you know, the Plex server crowd, that wants to
spend no money - but pro users, even at SMB levels, need more stuff, and the lack of a TX-800P expander, and the now hard to find REXP-1000 Pro - well, it's all very frustrating. I love seeing QNAP talk about 25G and 40G - but
no switch. All the new switches seem like little toys for home users.
I just don't get it (but what do I know).
Bob
Bob Zelin / Rescue 1, Inc.
http://www.bobzelin.com
Top
Post Reply
27 posts