Introduce yourself to us and other members here, or share your own product reviews, suggestions, and tips and tricks of using QNAP products.
Post Reply
278 posts 2. dlna stream from QNAP to an android box (which has kodi installed). I like Himedia since it has good hardware and features, unfortunately neflix stream quality is reduced intentionally. If you use netflix get a roku or any Netflix certified device for full quality stream for that service. The cheapest option is to use a google Chromecast which you plug in to the tv and use wireless to stream from QNAP via DLNA.

HiMedia is the most powerful media player that I had ever tested. In addition, it has the best picture quality too. Auto frame rate switching is supported to ensure you get the smoothest playback as well. Finally, this TV box is capable to playback crazy high bit rate videos like 4K Jellyfish with 400Mbps on internal storage. Rest assures that others 4K Ultra HD 10-bit 3840 x 2160 HEVC 60fps videos can be playback smoothly too. Yup, no matter in h.264 or h.265 codec. In addition, it also support most of the popular audio codec like AAC (Dolby Digital), AC3 (DTS), Dolby True HD and DTS HD-MA on both 5.1 and 7.1 channels (passthrough supported). HiMedia has done a great job in this department! All thanks to HiSilicon’s Imprex Engine 2.0 on their own media player. Note – HiMedia Wrapper will be used with Kodi in this case.

3. dlna stream from qnap to smart tv (instead of android box, you do to smart tv instead. essentially it's more or less the same)


If you need transcoding (especially if you opted for option 1), plex and emby will do. If you want best quality stream use Kodi for directplay (doesn't use transcoding which reduces the quality of your media during playback).

Keep in mind transcoding performance is dependent on your models cpu power. Refer to this list
*may not necessarily be up to date with all the latest models available
https://docs.google.com/spreadsheets/d/ ... =314388488

Based on plex googlesheet, other users reviews & my own testing, i recommend QNAP models with either a intel i3, i5, i7, or (TS-X73 NAS series) if you intended to use transcoding features, for best experience. That is not to say that other models aren't able to transcode, it's merely as a guideline for hardware specs that are not likely for you to run across limited transcoding experience and you wondering what is causing stuttering with certain media types.


For Intel hardware acceleration with quicksync you can refer to this


*update: I also noticed that qnap had an article about their recommended QNAP NAS models for Plex (especially when transcoding), it's worthwhile reading as well
https://www.qnap.com/solution/plex-best-nas/en-us/


*other user experience for QNAP transcoding

GTunney wrote:If it helps at all I'm running Plex on my TS-453B and using the plex pass beta with hardware transcoding.

GTunney wrote:TS-453B has been absolutely fine for me. I'm running Kodi MySQL for my house then plex for when I'm not home and for a friend in the forces who has access to my movies. Handles pretty much everything I can throw at it and doesn't grumble.

Average CPU usage is about 5% and Ram usage is 30%

Not too sure if its possible to swap out the BT homehub so you can get a better router instead of getting a Wireless AC bridge. I swapped out my Sky Fibre router with a Netgear D7000 AC1900 and this lets me stream 1080p mkv to the kids amazon fire tv boxes upstairs via NFS.

Noticed on the Plex googlesheet it was updated with the QNAP X73 series using AMD RX421BD Quad-core 2.1GHz with full marks doing plex transcoding. Also our own qnap resident Trexx also confirms this as well.

Trexx wrote:I have been very happy overall with x73 and how it performs on Plex. I don't recall running into any issues in terms of Transcoding 1080p. The current HW transcoding beta does NOT work with the x73's AMD GPU (at least as of 1.6 B3 release), but it still performs well. I primarily use it when I am remote as I use KODI when local, so I don't use it nearly as often as KODI overall.


To sum it up, if you hook up QNAP via HDMI to your HDTV, the interface is very reminiscent of how those android box interfaces look, except it doubles up as NAS. So rather than wirelessly trying to access via DLNA to the QNAP from elsewhere, your sitting right on top of it with it's huge storage capacity, removing networking bottle necks for accessing your media direct to the HDTV. This is the primary advantage for using the HDMI.

Personally i don't use HDMI, because i cannot physically position my QNAP right next to my HDTV, so instead i opted to use wireless router instead. My HDTV is connected to a Himedia android box which has wireless, so it can connect to the QNAP via DLNA. So my stream experience is only as good as my wireless performance when using Kodi (running on my Himedia device, not qnap)


*what i would add onto that first video, is a NAS by itself ISN'T a backup. I recommend combining 2 devices to mirror the data e.g. NAS backup to cloud service, or a NAS to another NAS. Not sure that the video clarifies properly regarding this, that NAS should never be depended on as a stand alone unit without a proper backup plan in place for it.


What is the Difference between NAS, SAN and DAS

feel free to edit/remove if it isn't.

How to install Kodi unofficially onto Qnap

You have two alternate choices:

Just install Linux Station and you can use Kodi, VLC Media Play or the play of your choice and have the full power and easy of an entire operating system at your disposal.


In this example it's to a LG UHD TV 4K to be precise.

What is the reset button?

General Settings (General)
* Enable configuration reset switch: When this is enabled, you can press the reset
button for 3 seconds to reset the administrator password and the system settings to
default (NAS data will be retained) or 10 seconds for advanced system reset.

Advanced system reset: You will hear two beeps after continuously pressing the
reset button. The NAS will reset all system settings to default (similar to the system
reset in "Administration" > "Restore to Factory Default") except all the NAS data will
be reserved. Settings such as users, user groups, and shared folders will be cleared.
To retrieve old data after an advanced system reset, create the same shared folders
on the NAS and the data will be accessible again.

storageman wrote:Yes but the RG partitions are maintained. Hence the comment it doesn't wipe the drives, not like running DD command or other format.
"...except all the NAS data will be reserved. "

Qnap do not provide a true drive wipe option. Use keepass which is many username/password credentials stored on an encrypted database, for which you only need to remember 1 master password to access.

There are additional settings such as after x amount of time log out of keepass. This way your aren't signed in indefinitely, and people can't just simply access your desktop/laptop to access your keepass just like that while your not around. 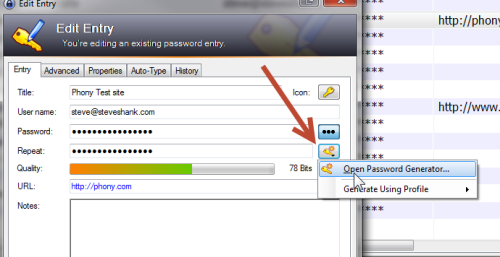 This is an initial guide guide for keepass to get you started. he doesn't use the chrome extension, so he has to manually copy/paste credential which is a hassle


Unfortunately the video in German? Use the youtube subtitle auto translations to your language of choice for it to make sense.

schumaku wrote:One of the reasons why _all_ the Web Form based login used in favour over the classic Web Basic Auth (updated as RFC7235 in 2014) s***s. Or even better forget this username password garbage and migrate to client auth certificates. All this would play outside of the reach for JavaScript. But coloured Web pages with logins it "looks" better - and this is blinding managers and users. makes some good points though i don't fully agree to disregard everything. If you are only looking at specific hard drive appropriate for NAS use, and there is sufficient number of drives, and been running 24/7 for a long enough period in years, that should be good enough to go by just for the AFR for that spefic hdd model of drives. just because you compare against desktop hdds (which you shouldn't use for NAS) doesn't mean you ought to toss everything else out the window. I have not seen anyone else doing this other than backblaze for providing afr stats on so many drives.

that said the available hdd models on market for NAS is either HGST deskstar NAS, western digital red, red pro, or those seagate wolves. so stats on these specific models would have been nice

also i don't believe that just a NAS drive is sufficient for a purchase decision regardless of brand. Just check anandtech you'll see some different specs and features, as well as performance benchmarks. So no, i'm not gonna simply buy a HDD just cause it says it's NAS certified, theres a lot more to compare between hdds.
http://www.anandtech.com/show/8265/wd-r ... chmarked/3

But his bottom line about expect hdd failure regardless and plan for it is a sensible one that i agree on fully regardless of which nas hdd you get, cause their all mechanical hdd after all

If backblaze could do this but for the more popular hdds we use for NAS that would be great, but i'm not gonna hold my breath that this is gonna happen. Till then just got to rely on forum to hear if there too many complaints about a specific hard drive model, then something is most probably dodgy going on.

You decide yourself, but personally i take everything with a grain of salt