Introduce yourself to us and other members here, or share your own product reviews, suggestions, and tips and tricks of using QNAP products.
Post Reply
101 posts

seeing as the memtest86 is still no errors,

maybe the ram contacts are not clean? uh..... is that a possible reason?

Just a suggestion, as I am not reading hundreds of posts and hundreds of links to catch up on this complicated and erratic thread - Hardware issues need to be under their own thread, rather than a "review" thread.

I take it you are running memtest from the QNAP NAS? https://wiki.qnap.com/wiki/Memory_Test when testing ram modules. a one line answer will suffice.
Regards Simon

Toxic17 wrote: ↑
Wed Jun 12, 2019 6:05 pm
Just a suggestion, as I am not reading hundreds of posts and hundreds of links to catch up on this complicated and erratic thread - Hardware issues need to be under their own thread, rather than a "review" thread.

I take it you are running memtest from the QNAP NAS? https://wiki.qnap.com/wiki/Memory_Test when testing ram modules. a one line answer will suffice.

I answered your question in the other thread fyi.


Anyway, i more or less already finished covering most of what qts 4.4.1 offered, so nothing much else to add onto the topic at this point for now.

Issues arising from qts 4.4.1 and other commentary would be found here, or at this link below, or some other thread/post on the forum somewhere (use the search)
viewtopic.php?f=151&t=148709#p716286


unfortunately there is no open public bug tracker to help keep track of these things orderly like github does e.g.
https://github.com/gorhill/uBlock/issues

I cannot get any pic folder saved.

then in multimedia console assign your qumagie media content folders to index.

then in multimedia console under AI is what indexes to qumagie. The thumbnail portion should apply to qumagie as well i believe. So you need to do index and thumbnail generation as well.

And CACHEDEV2_Data is where my pictures (and media) are kept!

i'm not sure i recall /SHARE/CACHEDEV2/DATA was excluded, that just seems odd to me.

Recycler, trandscode, snapshots etc... yes those definitely SHOULD be excluded.


all i can say based on DEFAULT settings (no idea about other custom settings you do), you would go to multimedia console and add your media folders.

Then these added media folder locations, should be the main shares for example.

So you can either add, pictures..... OR you can do /pictures/locations/france etc (basically a specific location rather than the entire thing).

thats the location path i use.... if you use something else, then i have no idea how the thing will behave

Hi, do you still have the crash issue? The beta looks stable on my TS-453A, but I do not use any SSD drive.
Top

anyway once my test completes i'll boot up and try disable some apps see if that helps, if not i either have to wait for new ram to arrive to replace (despite memtest86 seemingly saying the ram is fine) or to try a firmware downgrade.

keep in mind the random reboot happened when qts was installed on 4x4tb hdd raid5. i toggled ssd cache acceleration from on to off, didn't help. i later reinitialized, and install qts onto 2x256gb raid1 m.2 ssd, it still crashes. also i ran smart tests and disk scan nothing got flagged. which makes me believe it's not a hdd/ssd issue, it's something else.

gtunney said his issue got solved changing ram. he did memtest that came out fine, but when change ram that fixed things. so i am praying it's that cause if it isn't i'm out of ideas.

slow process but i will keep the post updated. actually i have a thread made for this random reboot issue i'm experiencing here
viewtopic.php?f=25&t=148952

anyway thx for your interest

Thanks for your feedback, good luck.
Top

I'm also seeing random reboots after upgrading to 4.4.1. I think they specifically started after beta3, can't remember seeing them in beta2.

System can be up 3-4 days sometimes, sometimes less than 24h.

System can be up 3-4 days sometimes, sometimes less than 24h.

mine happened on the ts-877 starting with the first qts 4.4.1 beta release. i did a clean reinit install too. even a reflashed update in case it was a bad update issue, but it was still random rebooting.

i don't think i tried build2 and 3 to see if anything changed. because changelog did not mention any changes to fix the issue i was having.

at first i thought it was ram or some other hardware issue. but when i downgraded back to 4.3.6 using a clean reinit, i noticed the problem went away.

make sure you report this to helpdesk
https://helpdesk.qnap.com/index.php?/Default


in the end all they said was to try out the stable release and hope it's fixed then.....

I myself haven't YET experienced this (i did in the first beta with a ts-877. But not on stable build just yet)... but i would treat this QTS cautiously at least for the first month since it's released.


... so anyway, what i wanted to continue where i left of was the Qumagie. Any changes?


I listed some that may be new, or i just noticed 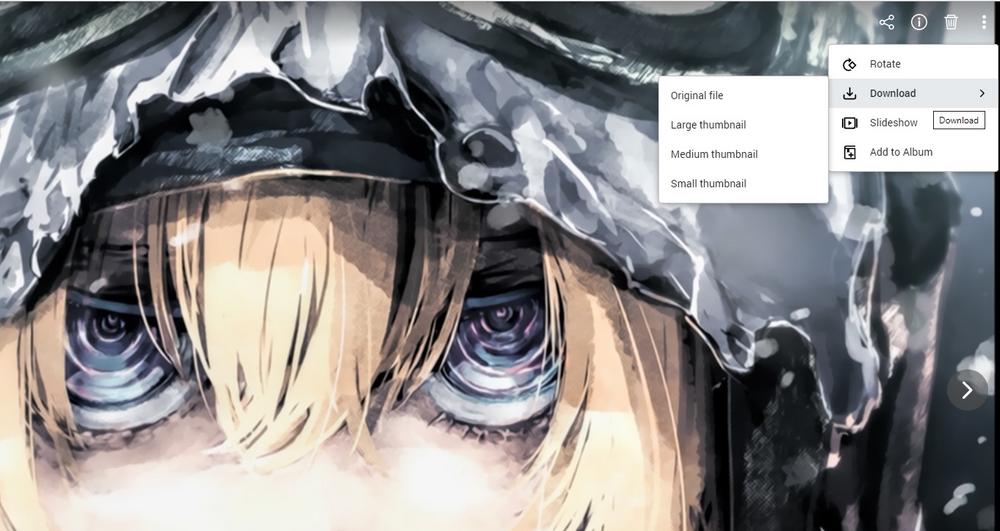 2. you can merge pictures into persons. this process is quite simple though i would suggest users spend a couple of minutes to familiarize with the check boxes, options for handling stuff in qumagie.

4. there is an option to say "i don't know this person", i assume this means to remove it from the current person label but not specify a name just yet for this person? (it should then look like the rest of the YET to be named persons clutter) if so that is great option to have. Cause i too want to set aside someone i know not this person, but i have not yet identified to name this person just yet, so this option is very useful.

5. there is an option to say "this is not a face". This is for the misidentified pictures that serve no purpose, so this option is definitely needed for cases like those.

6. performance when surfing pictures seems very smooth and bouncy? (is that the right term. it feels like they pop out comfortably upon viewing a pic when it's loading). There is some slight delay for blurry thumbnails to show, before crisper ones replace them (not much of a problem, and probably helps with browsing performance so it's fine).

1. if a picture got focused not on a face, but there is a person in the picture, but you merely need to adjust the box to cover the face, you cannot make that adjustment. In the old facial tagging, we had boxes where the faces were detected which you could toggle to view or not, and adjust those boxes manually, or to create new boxes. They removed that in Qumagie to make it less smarter. This to me is the major downside for Qumagie. It was a really neat feature to have.

(a) if a picture icon does not point to the face, you cannot make an adjustment. You either use it still or you label it as not a person. There doesn't seem to be an option to later manually add this picture again ever since Qumagie couldn't properly manage it.

(b) if a picture has multiple persons in it, and you are viewing in the album, so you don't see the pictures icon to know who is being detected in this picture (because there are false positives at times fyi), how to you know who to label it for? Just try it yourself, you will understand what i'm talking about.


This is just one example of for the difficulty with qumagie

this icon selection makes no sense. to make sense whats this picture you go inside to check it out

Then you see 2 persons 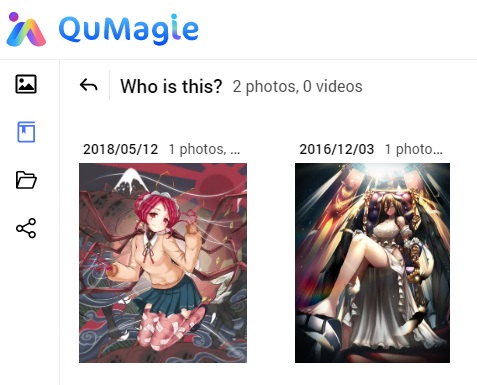 So i already know these 2 characters and want to move them to their persons labels separately. The issue though

1. how do i EDIT the icon selection for the picture to go on her face correctly?

2. How do i VIEW or Edit the icon facial detection box? they removed it.....

3. how do i know the winged lady's picture has the facial icon on her face? (you cannot just assume. Just look at the first screenshot as an example why....) there is no facial detection box to confirm this, nor any icons either (because she is not the front cover for this album)

see.... there is a lot of issues with users trying to cope when Qumagie is not really offering the user the solutions required to manage this app properly.


2. in persons, you get icons of people to begin labelling. I noticed that as i am labelling people, there are new person icons appearing. It feels like that these icons are not fully displayed in persons. Yet when i scrolled right to the very bottom it already reaches the end, and there is no loading for more persons. So could this be a bug? why else then after i finish naming/identifying a person/persons, that new icons start appearing? They should just display all persons icons immediately

3. i am not sure that Qumagie is utilizing nvidia graphics card to acceleration facial detection or not. based on resource monitor for GPU usage during the AI detection indexing process which showed gpu use at 0%

1. pictures added for persons that look nothing alike (the usual misidentification every now and then)
2. selecting pictures and moving to a different person or saying i don't know this person, doesn't seem to work at times or at all.

The idea and intended usage for Qumagie is a good one. But it still doesn't feel stable enough for actual use.

there is a lot of issues with users trying to cope when Qumagie is not really offering the user the solutions required to manage this app properly.

Has there been some improvement? yes but still a lot to do imho.

//note: i will later point this out to helpdesk when i am free. So yes i haven't forgotten that qnap doesn't go here officially to troubleshoot. I'm just pointing these issues out to other users so you too can complain to QNAP about it