Introduce yourself to us and other members here, or share your own product reviews, suggestions, and tips and tricks of using QNAP products.
Post Reply
22 posts

love the portability. i probably can copy over some files i need to be on hand during my away time. or i can just VPN for remote access to main NAS, and have some local storage as well to copy stuff over if needed. In the youtube videos they mention using cachemount. is that for cloud only (google drive, onedrive, dropbox etc....)or can it also cache NAS remotely as well (i'll test this when QTS 4.4.1 stable comes out)?

This type of device i wish it had M.2 NVME ssd rather than M.2 SATA ssd. NVME outperforms and is similarly priced these days.... you'd obviously want NVME preferably as such.

The HS-453DX is an alternative to the TBS-453DX. Yes it has bigger dimensions, probably closer to a laptop size almost. But it supports 2 x 2.5'' HDDs. HDD's are more cost effective for storage space. Downside is it will add to the weight..... 2tb is the highest for ssd these days. 4tb is a recent thing, and i'm not sure if it's supported yet for QNAP? not to mention the premium price you'd have to fork out vs hdd for that kind of storage capacity.

TBS-453DX compared to the desktop/tower QNAP NAS boxed models (for the ones with intel celeron anyway for a closer comparison), it's basically the same, just in a smaller form factor, and it's lighter. If you don't require mobility, i'd suggest getting the big NAS models like a ts-x53be for example. Because then you can get more storage space cheaper for better bang for bucks with a bunch of 3.5'' HDDs (recommended 4bay NAS with 4 hdds in raid5). The TBS-453DX is mostly for mobility purposes as i've stressed multiple times already.

It was mentioned somewhere that TBS-453A came with more ethernet ports, effectively making it a switch. i never used that before so not sure exactly how it would compare, but something to take note of. Not sure why they opted for more usbs instead, although i did find a use for them, which is to charge all my usb devices

.thats not to say you can't just use a switch if you require more ethernet ports, though it will be an additional component to purchase. That said, the TBS-453DX does come with 1 x 10gbe which is nice.

earlier i mentioned that it can serve as a media player for your HDTV. Would i solely get this just for that? probably not since there are cheaper options. But you don't buy it to perform just a single function to begin with. You can do all sorts of things with it in that sense which adds more value for it, it's a portable NAS

Yes it's outer shell is plastic mostly (with the inner parts with the motherboard pcb, fan and heatsinks) but the build quality is overall excellent, and as mentioned before the cooling and sound noise is just fine.

it's not perfect since i highlighted parts where i wish it did better (M.2 NVME SSD *cough).the lack of 2.5'' HDD support doesn't count so much since it's a trade off between mobility and bang for buck storage space. you can opt for the HS-453DX if you require it, if you're leaning more that way. The TBS-453DX leans more toward even greater mobility and a smaller size. but for the scoring i did not mark the device down because of this specific difference.

that said, it does it's function well as expected when using QTS (i didn't delve too much into QTS in this thread, so you can refer to my QTS 4.4.1 review for that. But yes the functionality of QTS did play a part in the scoring, though i did not cover it extensively in this review).

I'm pretty happy with it so far. Even Tanya Degurechaff seems to agree 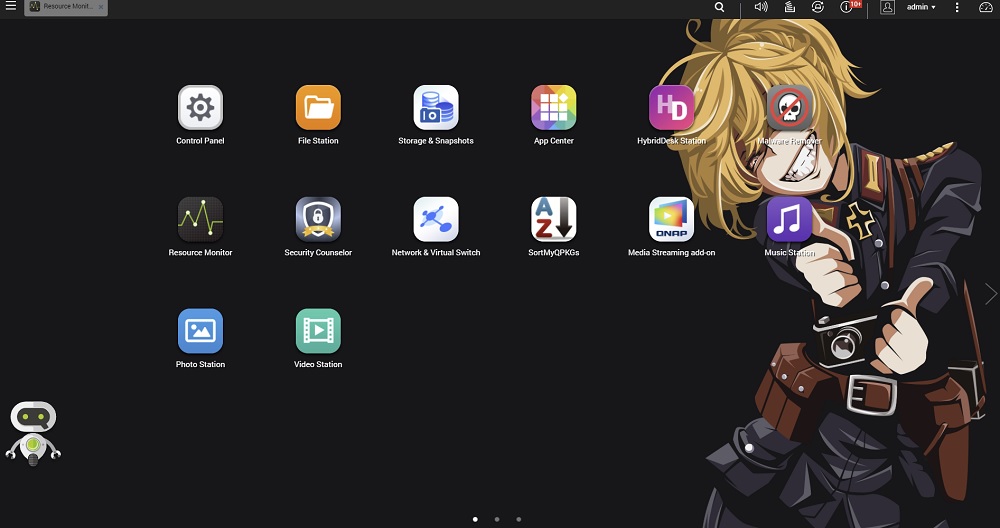 covid19 lock down was eased, so managed to borrow my bro's ps4 to play ff7 remake, and i lent my tbs-453dx so he could watch netflix.

he seems to be content using it for netflix. i taught him how to use the hdstation, basically just plug in the hdmi for initial startup, then power on the nas, select hdmi input to the device, login to hdstation, then you can select the netflix app (that was previously installed in qts appcenter hdstation sub section). i'll get his opinion on it at a later date.

i didn't run netflix from it myself since my hdtv already supported netflix in tizen, so there was no need to. but i guess for people lacking support, the tbs-453dx could be an alternative method :} ? there is also an interesting option, which is to use the QVPN to then use a VPN to get around geo block.

using a nas to watch netflix, sound like using a canopener as a hammer..sure it works ..somehow..but not really the best tool for the job
Top

well it's something we had on hand that works. whether it's best or not i never said that. but i did note it does have qvpn for which u can use vpn, if your stuck with a smart tv with a crappy eco system like tizen which does not have a vpn app, nor do you want to run the vpn from your router for some reason or another.

netflix has this streaming certification policy.... only their certified devices get the full 4k streams, while others are limited to lower resolution

another thing i wanted to check

By limiting all of the other devices out there, Netflix has the ability to “steer” you into specific devices. The devices that are paying Netflix the most in licensing advertising fees.

I really like doing vpn on the router..makes any device vpn capable..nothing to install

so that (browser overlay?) netflix option in the qnap...is it hd capable or limited to sd (missing drm) as most no name android boxes?
Top
Post Reply
22 posts