In the PC space, which is the focus of this article, cellular connectivity certainly exists, but almost exclusively in niche roles. While there are advantages to offering directly cellular connection on the PC, the extra recurring cost, especially in North America, means that most laptop owners will use Wi-Fi for network communication. 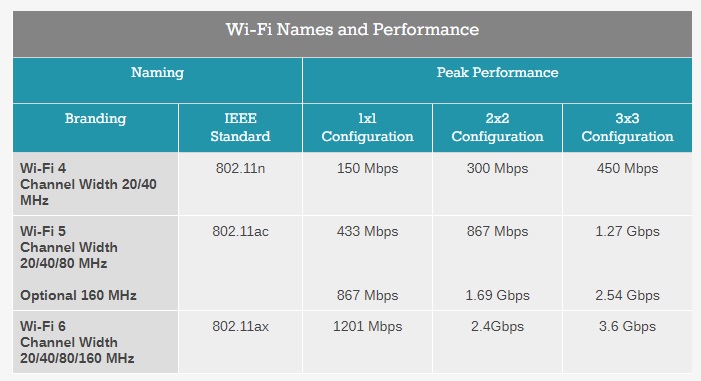 In an effort to simplify branding, the latest three standards of 802.11n, 802.11ac, and 802.11ax have been rebranded to Wi-Fi 4, Wi-Fi 5, and Wi-Fi 6, respectively. In the long term, the new branding should be much easier for most people to grasp, since larger means newer, although we’ve already got some confusion with Wi-Fi 6E – the 6GHz band addition for Wi-Fi 6 – so we shall see how that goes.

Today, most homes should have at least Wi-Fi 4, or what used to be 802.11n. After all, this standard came along in 2009. Many will even have Wi-Fi 5, or 802.11ac, which offers some speed upgrades and a few optional extra features to help with scaling. Wi-Fi 6, or 802.11ax, is a very new standard, and until the end of 2019 there were not even that many devices which could connect over it. So, what is the point of this new standard, and do you really need to upgrade your home network?

This article intends to help answer those questions, as well as show how we at AnandTech are transitioning to Wi-Fi 6 for future reviews.


but even then, some devices like smartphones tend to rely more on wireless. or any device where wired is not possible or convenient.


or has the status quo changed with Wi-Fi 6? perhaps

To The Future
If the question is do you need Wi-Fi 6, the answer is most assuredly “maybe”. The performance improvements are substantial, but really rely on a very strong signal to get the most data throughput. Most of the new features of Wi-Fi 6 focus on the influx of devices to the standard, and dealing with many devices connected to the same access point, or devices trying to share spectrum when connected to different access points.

The addition of Orthogonal Frequency Division Multiple Access to the Wi-Fi 6 standard will likely be the most impactful change to this revision. It will allow access points to carve up their channels into smaller slices, allowing more devices to communicate at the same time with less overhead. Each device will lose out on peak throughput, but the reduced latency should help a lot, especially in very dense environments. It should help with excessive overhead on the network layer when multiple devices are sending many small packets at once, which is a very common scenario, especially in an office or stadium situation.

Multi-User MIMO was in the Wi-Fi 5 specification as an optional implementation, and as such it did not really take off. Wi-Fi 6 should make this more prevalent, and also adds support to the MU-MIMO on the uplink, not just the downlink side. This will increase the capacity of access points for higher-speed use cases, but MU-MIMO did not get a lot of traction in Wi-Fi 5 so we will have to see how much adoption it gets in Wi-Fi 6.

The wider 160 MHz channels will offer significantly more throughput in the home environment, as we saw in our performance tests. As with the 1024-level QAM though, to see the biggest benefit you will need a strong signal. The vast majority of home networking is still limited to 1 Gigabit Ethernet, which puts Wi-Fi 6 into somewhat of an awkward spot, since it can transfer faster than most wired home networks, but even so, that is still a significant improvement over Wi-Fi 5 which would cap out around 600 Mbps on the best Wi-Fi adapters. If you work with a lot of large files, and you prefer to use Wi-Fi instead of the more consistent, yet cumbersome Ethernet, there’s still a nice boost to be had.

The future looks strong for Wi-Fi, and the Wi-Fi Alliance has made some excellent revisions to their standard to help improve Wi-Fi for the next generation of devices. As with any standards change, the impacts will not be seen right away. Both the access point, and the client need to be leveraging the new standard for the improvements to be noticeable. We’ve already seen the latest generation of smartphones start to offer Wi-Fi 6, and there’s been some movement in the PC space as well with Intel’s Project Athena. Anyone looking at a new router today should certainly opt for a Wi-Fi 6 model, but there’s likely not a major need for most people to move from Wi-Fi 5 access points right away. If you live in a heavily congested wireless area, the advantages of features like BSS coloring and Spatial Frequency Reuse should help out in those scenarios, but for people looking at purely performance, Wi-Fi 6 somewhat runs into a wall of its own making, since it can now transfer at over Gigabit speeds on a typical 2x2:2 connection. But who are we to question performance?


Anyway the article is just an update on whats the current status of WIFI in 2020.

azfacea - Thursday, February 13, 2020
this is getting really ridiculous. wired lan is going from "slower" than wifi to "much slower" than wifi. If aliens came down to earth i am not sure what they would think of this lunacy.


zshift - Thursday, February 13, 2020
This isn't the case. 2.5Gbps and 10Gbps Ethernet has been out for a while now, it's just not propogating to consumer hardware because it isn't needed in most scenarios. Ethernet can maintain these high data rates over very long distances. This article showed that even wifi 6 across a few rooms drops to below 500Mbps. Higher wifi speeds are needed in order to compete with Ethernet over a long distance, but it's still far more stable (though not easier) to drop Ethernet throughout your place to get near 1Gbps with older routers.

Gasaraki88 - Thursday, February 13, 2020 -
It sounds faster on paper. If you ACTUALLY look at the speed of wifi on the AC 5GHz band with 2 of the same AC routers connected to each other, it is not faster than hard wire gigabit connection. Look at some router reviews.

PEJUman - Thursday, February 13, 2020 -
this is just one of those rare inflection points (fast ethernet with 802.11n was similiar), which brought gigabit ethernet into mainstream.

I have been running 10 Gb ethernet on copper, mixed cat 5e and '7' + Wifi 5 (802.11AC) network in the house for the past 4 years, if you are patient, you can find deals on 10 Gb stuff here and there. Market acceptance on 10 Gb is still quite slow, but I am hoping 5 or 2.5 Gb will be better at getting down to affordable price points.