This is the best place for community developers to publish their genius work. Your Apps enrich the QNAP Turbo NAS.
Post Reply
283 posts

Rocinante wrote: ↑
Wed Apr 15, 2020 12:53 pm
The latest version (4.2.3.1) installs in a completely different directory from 4.2.1.0, which results in a potential of two programs running at the same time. I had to copy the fast resume and config files to the new version's directories, and then I used QBoost to disable the older version of the program.
If you don't do this, you will have to reload all torrents again and configure the program to point to the right directories.

Thanks for this! Could you share the relevant directories' paths?
Would it work if I preemptively move QB 4.2.1.0 to the new folder?

I made some notes as I did the manual installation. You won't have to reload your torrents and you won't need to configure your program options if you do this:

Make sure the old files copied over correctly to their new directories.
Otherwise, use the rm -rf command to remove the new config files and then re-copy the older config files.

^^^
Thank You! This totally worked... I copied the files in a roundabout way by downloading them via FTP and re-uploading them but it had the same effect... It would have been very time consuming to add the torrents individually.
Top

I am also having this problem.
Also, I used to be able to see the Qbittorrent app in "My Apps".
Now, the icon for it appears for a few seconds, and then disappears, so I cannot even uninstall the older version of Qbittorrent.

This is how it is supposed to appear: 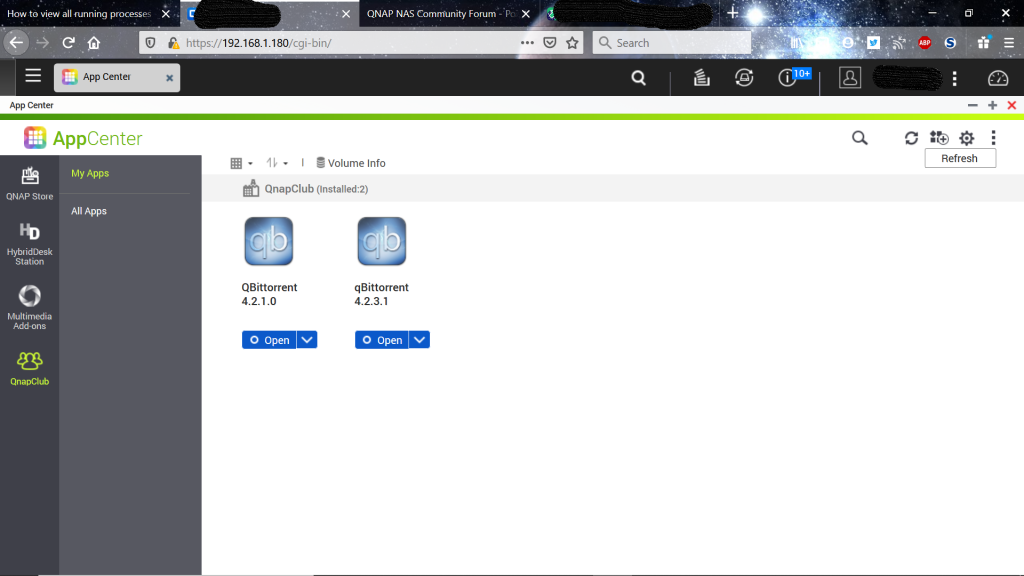 But that only appears for a second and then it goes blank: 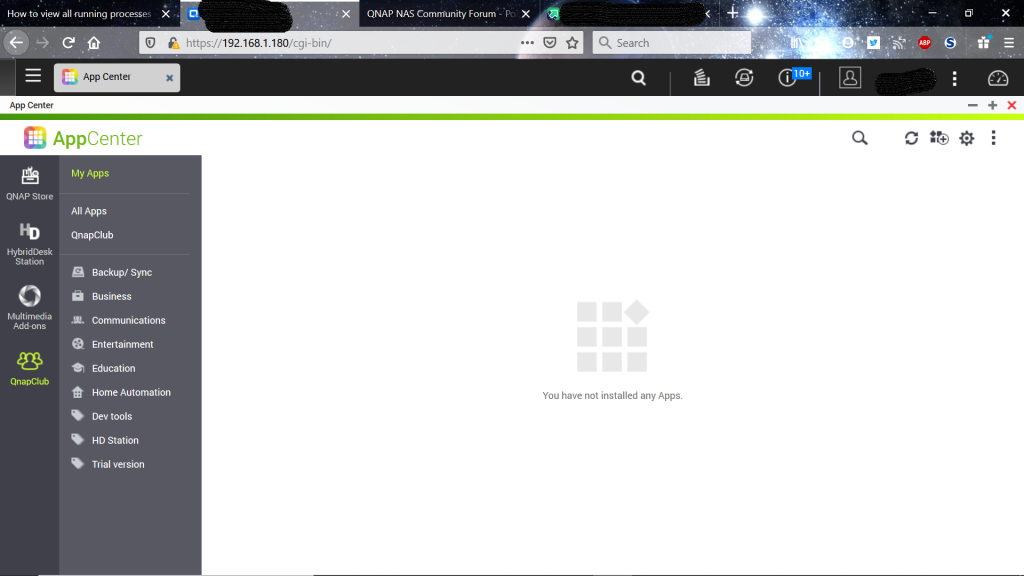 This is because of two mistakes/bugs
how to fix is below the explanation
(EDIT: one issue was meantime corrected)

1. The QPKG App is listed in repository under different name, specifically qBittorrent vs QBittorrent
When you open AppCenter, for a split of a second it will show apps (and their icons, names) based on data provided by QNAP QPKG tools (qpkg.conf file and others).
AppCenter will on clicking the store tab icon read and sometimes update repository (XML file) and when it does, which might be in a flash or a few seconds, it will rearrange apps (including their names and icons) based on info from the repository.
The connection between apps in the system and apps in the store (repo file) are made based on QPKG_NAME/"InternalName"
Both the new and the old qBittorrent will disappear from AppCenter when repo file is processed, because the old was removed from repo and the new is listed under misspelled name.

2. QNAP AppCenter must not assume all installed 3rd party apps are always present in their store.
When a QNAP Official Store QPKG app is removed (or renamed) from a store, but it's still installed, it shows in "My Apps" tab of QNAP Store tab.
This behavior should be the same for other stores, but it's not. An installed QPKG will not show in AppCenter after it's removed from it's store.
Removed QPKG App from other than official store used to show in QNAP Store (official) tab before. Now when it's removed from the store, it's completely hidden.

to fix - for an user: If the maintainer or QNAP will not fix the issues, you can use this workaround:
Remove the QPKG app store identification.
Doing this will move the QPKG app from QNAP Club tab to QNAP Store (official) tab.
You can do this for both old and new (update might move it back) QPKG apps and they will be visible and allow you to enable/disable/uninstall the app from the AppCenter.
To do this, find qpkg.conf file in /etc/config directory
MAKE A BACKUP
find [QBittorrent4] section for old qBittorrent app
[qBittorrent] section for new version
remove or comment-out the "store" valuename value pair:
# store = a79684706c9e3282fd9972d6737d6287
to see changes, close and re-open AppCenter. You'll see qBittorent apps under QNAP Store / My Apps
Now you can enable/disable/remove

EDIT:
Alternatively, instead of disabling/deleting, you can change the store ID. Adding a zero at the end is sufficient.
Doing this will cause the disappeared QPKG app to be moved into a special group called: "3-rd-Party Community (Installed:)" which will appear below QNAP Store - My Apps.

This weird behavior made me suspect where QNAP coders made a mistake.
From previous behavior of App Canter, where un-official Apps showed mixed with Official apps on QNAP Store - My Apps tab, they added this group, which is still inside QNAP Store - My Apps, "3-rd Party Community".
This should have read 3-rd Party Apps, or community Apps, but never-mind.
Also, why not add new tab for them?: "Unknown source"

But the problem is, that the new code is checking if the App belongs to a 3-rd party store AND if this store does not exists.
But they did not change a code which is causing that an App removed from a repository store is not shown inside that repository's tab, because it was before showing in official QNAP Store tab.
Now there is a complement of a set of Apps. Apps which are shown nowhere.
Last edited by paponius on Mon May 11, 2020 3:09 pm, edited 1 time in total.
Top

cjdom wrote: ↑
Sun Mar 29, 2020 7:25 am
Is there any way to install/run this app as user (not as admin)?
Because a simple mistake in the path of download folder messed up my TS-328 by filling system partition and making volume disappear... I just don't want that to happen again.
...

Also if your qBittorrent webui get hacked, attacker gains root access to your NAS. Quite charming.

Yes. I am running qBittorrent as a limited user for couple of years without major problems.
I was offering this here before, but there was no interest.

I don't want to just throw my app here as it's untested (on other that my systems) and might create more problems that good.

Send a msg if you are interested in testing it. Or someone else, but you must understand what it does (shell script full of commands) to give some output on testing. Saying "it does not work" does not help. Also, I don't have time to help undo a possible permission damage.

What this does is:
create a "[App_qB]" user. The user is never enabled and can't be used to log in.
Get paths which are used by qBittorrent from qBittorrent.conf file.
Check and change permissions on these paths so both "[App_qB]" user and someone who will play downloaded files can access them. This is done on each start of the app.
It does account for both basic and advanced permissions or even mixed cases.

What can go wrong: Different configurations on QNAP give access to media or other files to different groups/users. In additional you can have basic or advanced permission (or windows) set in QTS.
All these variations need to be tested.

additionally, this is a part of my QPKG, it also does backup/restore of conf and torrent files and does some more stuff.
Top

FYI repo issue has been fixed

Thanks for your prompt reaction.
Top

Wezuwiusz wrote: ↑
Wed Mar 11, 2020 1:59 am
I've installed the app on my ts-128a without any issues and I'm able to use it but i want to grab magnets from chrome on the go like i do with transmission + extension - transmission easy client couple click and it's added any extensions for chrome i can use? Just like to add I have dekstop version of qbittorrent as i want to download some stuff on my laptop instead of my NAS and magnets works flawless on desktop version

I have a TS-128A as well. Just wanted to know from where did you get the installation package and which version? I tried both x86 & x64 files from QNAP Club but both failed to install. Any help?

Is anyone else getting a problem after updating to 4.2.5 that the "Installed Search plugin:" is empty and it is not possible to add via the install new plugin button? I was initially on 4.2.1 and it was mainly working but after upgrade to 4.2.5.0 it isnt. I have uninstalled and re-installed by the repo.

thanks for any assistance.
Top

I SSH onto the qnap to have a look through the folders where qbittorrent is installed. I read on some other thread about the different versions on Python so checked the nova and nova3 folders. The nova3 folder had less files, so i decided to copy them from the other folder as a test.

I made a back up of /share/CACHEDEV1_DATA/.qpkg/qBittorrent/.local/share/data/qBittorrent/nova3/ and the /engines sub folder.

I then restarted qbittorrent from the qnap app centre. It then gave me the list of search plugins and add ones via the other button. I also did this after updating to 4.2.5 to ensure latest files.

nb. I haven't tested that this doesn't cause any other issues or whether I should have only copied certain files but it does seem to work for now.
Top

it is already on repo

I've tried all four and none can be intalled with TS-x28A.
Top

What is the standard port? I have installed app, but I can't connect to it via web interface.