Ideally you want to use openvpn. For torrenting, the VPN you need is a paid subscription VPN, like NORDVPN, Surfshark, Mulvad etc.

Note: plz don't be overly dependent on one source for which VPN to consider. Because a bunch of these sites tend to be paid reviewer websites. Best to make your conclusions based on multiple reputable sources.


There are some of the more reputable review sites for VPN
https://thatoneprivacysite.net/


For some people, finding a good VPN can be frustrating. That’s because many of the websites that recommend and “review” VPNs do not base their recommendations on testing results, but instead on questionable marketing claims. This is especially true with all the “best VPN” websites (there are dozens) recommending dubious providers.

Even worse, many of these websites are often paid to promote inferior and untrustworthy services. This may sound strange, but it’s quite common. Consequently, people waste time and money as they search for a safe and secure VPN service.

All of the VPN reviews on Restore Privacy are based on extensive testing to see how well the VPN protects your privacy and security. Every VPN is tested for IP address leaks (both IPv4 and IPv6), DNS leaks, reliability, speed, and how well the features work. Other considerations include privacy jurisdiction, company policies, trustworthiness, and the track record (background) of the provider. 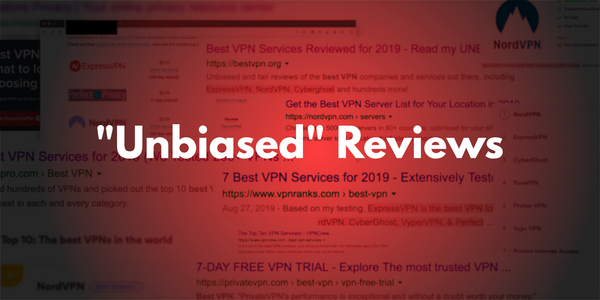 There's a massive problem in the privacy world. Websites, social media accounts, and other platforms are constantly popping up out of nowhere, telling you to buy The Greatest Service Ever in order to solve all your privacy woes, whatever that may be. These websites often employ marketing teams to make sure their "reviews" are what you see first when you begin your research. Some of them are even operated by VPN providers themselves, operating under anonymous business entities to hide their bias, or doing it right out in the open, hoping you'll mistake their advertising-filled press releases and blogs as insider knowledge of the VPN space.

When a seemingly "unbiased review" on a site is merely a paid advertisement in disguise, that website is breaking their reader's trust. From a consumer's point of view, affiliate marketing and other paid promotional techniques like this make it near impossible to know when a review is genuine or not.

This isn't going to be a lengthy blog post on advertising being bad, far from it. In fact, many of the VPN providers we recommend engage in responsible advertising across various platforms. The key is transparency: Their advertisements should look like advertisements, and nothing else.


openvpn is one of many vpn protocols. It's in fact one of the best modern ones used by many these days
https://www.youtube.com/watch?v=bnV-_BN9OkE

the most trusted vpn afaik is Mulvad
https://mullvad.net


but other than trust worthiness, there are other considerations, like price, performance and features.


Mullvad.net is a fast and inexpensive VPN with a serious focus on transparency and security. They have been in operation since 2009. Mullvad is based in Sweden and does not have a free trial.


I'm also looking at nordvpn and surfshark (not too sure about this last one....).

do your own research and decide yourself, but stay away from VPN's with no credibility 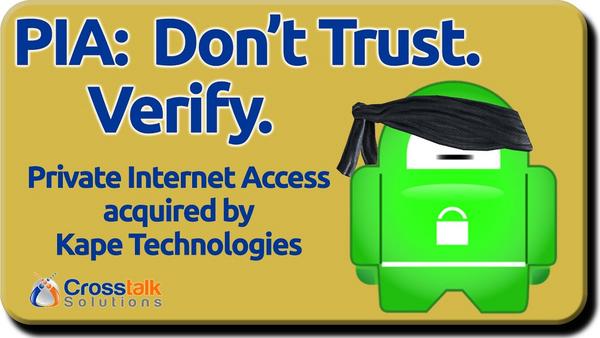 What does a company with a history of producing malware have to do with a VPN service that offers privacy and security?

For torrenting you aren't gonna be using a VPN server setup on your device...... you need a VPN client..... this is to connect to a VPN SUBSCRIPTION service...... these VPN companies are the one with the VPN SERVER, which you will be connecting to for the following benefits

- IP masking. You are connecting to the internet through their VPN servers located in different countries, to mask your own real IP.
- encryption. Because you are using encryption via the VPN tunnel, your local ISP has NO IDEA what kind of internet traffic you are doing. However your VPN provider does kinda. Best if they have a no logs policy, and keeps as few details about you as possible. So obviously don't use an untrustworthy VPN provider, or there would be no point using them.

VPN server created by yourself, can indeed be run on the QNAP NAS. but what people use that for is an ENTIRELY different purpose than a VPN provider subscription service offers. You are basically configuring a VPN server on your NAS to generate the Certs. Then you login to your QNAP NAS remotely (offsite) using a VPN CLIENT, to connect to your QNAP NAS VPN SERVER, using that CERT that you can download from your VPN server, and then install into the VPN client.

The benefit of this is

- encryption. you tunnel to your NAS remotely and securely.
- Only the VPN port is exposed, and even that requires the certificate in order to connect.

This video explains how this usage of VPN works
https://www.youtube.com/watch?v=ErfHkA2jYXI


so the NAS VPN server scenario ISN'T for masking your ip though it can probably do that, assuming you want the other device IP to be displayed as downloading the torrent...... The point of VPN provider is, you an anonymous user, use their VPN servers which are many and all around the world. This is far better than your own private VPN server

For torrent clients, you aren't limited to just the default download station. There are alternatives as well.

ALTERNATIVELY, there are also those same torrent clients, but provided via container station as docker apps. These are containerized apps, for the same thing. However proper configuration is highly recommended, so you don't accidentally expose your NAS due to improper configuration in regards to security. Do your research if you intend to use docker apps on your NAS and plan to do remote access setups


But for simplicity sake /ease of use for newbies, downloadstation or torrent QPKGs from appcenter, run from lan (no port forwarding) is safe to use. Just be sure to use a VPN subscription service

QVPN for vpn client. when you configure for this method, make sure that the QVPN is enabled for gateway, and for the VPN to reconnect on reboot. You can also enable the VPN to work for any connected device plugged in just for extra measure. OR, you can go to appcenter, downloadstation, and there is an option to SPECIFICALLY use QVPN for the download station traffic, while not using QVPN for everything else. You can use it that way if you prefer

vpn subscription service is mostly for ANONYMITY. (it's not gonna protect you if you login to facebook and email which everyone knows is linked to you

Well your VPN provider may still know who you are perhap? but as long as they have no logs policy, and no disclosure of your past or current traffic activities to anyone, it's probably fine.

At best it will keep your LOCAL ISP from knowing what you are doing online when downloading torrents.

Some local ISPs are bound by law to report subscriber activities to local authorities depending on what the local laws are in regard to torrenting.

In Switzerland and Canada, torrent downloading is LEGAL.

But using VPN, your downloading activity is only known OFFSHORE, probably using a Canadian VPN server where this thing is perfectly fine, and your local ISP has no clue what you are using your internet for.

This is what vpn subscription does for you